Heroin has been an ongoing problem that really took a hold of toronto in the 1970s but it was a relatively static addiction which grew but only at a percentage relative to the overall population of the city of Toronto. In the 1990s and 2000s Toronto saw a massive boom in addiction to opiate drugs with the introduction of substances like Oxycontin and hydro-morphine and Oxycodone which in certain areas replaced the heroin trade all together. More restrictions have been placed on the distribution of pharmaceutical drugs and this has left a large number of former prescription drug addicts with no option but to begin using heroin to meet their daily requirement of opiates. Heroin is now a growing concern for the city of Toronto as its use becomes more widely accepted amongst street drug users. 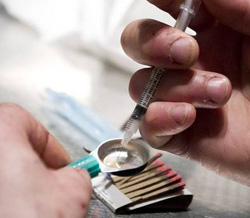 The movies have always vilified heroin and portrayed those who are addicted to it as morally bankrupt and capable of doing anything in order to get their next fix. Unfortunately this doesn’t explain the cases where the heroin addict is your Brother, Sister, Father or other loved one and their main tactic of obtaining money is through guilt and manipulation. If an addict still has a connection to a family member or any other person who can help them financially they generally will try to get money in a peaceful way before turning to violence or some other illegal means.

If you have a heroin addict who wants help but can’t find it or even a person who doesn’t feel they have a problem please contact one of our counselors to discuss your options today the only wrong move is to do nothing and hope it will get better on its own.

We have access to all the best addiction treatment centers in the Toronto area which have a proven track record in treating heroin addiction please don’t waste another minute call today and discover the right treatment program for the heroin addiction affecting your life.
1-888-391-9295

Get in touch with us